So I saw someone commenting on the new Supergirl series and that cover with the sword. 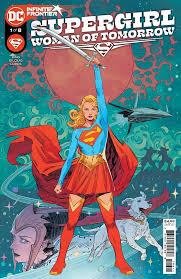 I'm not actually that bothered by superhero characters that don't generally carry swords/spears having the odd cover with a dramatic sword/spear pose. So, you know, whatever my issues with Tom King, that kind of thing is probably fine.

• Characters who really don't need to be carrying swords or spears:
characters who have another piece for the dominant hand (lariat, net, gun, throwable shield, etc.)
characters who are already super tough without (the Thing, Hulk, etc.)
basically most modern-day superheroes This entry was originally posted at https://philippos42.dreamwidth.org/161886.html, where Russian botspam is a rarity.
An exchange which should logically not appear in Wild West Wonder Woman:

"Look at you! Mome Brontë, out on her own, withering away!"
"Er, what did you call her? 'Mome'?"
"Short for 'from home,' meaning she's lost her way. She's very mome, far from home."
"Oh. Oh! I thought it was like, feminine of 'Pope.'" This entry was originally posted at https://philippos42.dreamwidth.org/161778.html, where Russian botspam is a rarity.
I've had this recurring idea of a story involving an Amazon named Venelia, which was a name Bill Loebs used in "The Contest". So when I saw this (I haven't been keeping up with the movies) I was thrown.

Also apparently killed off in the Justice League movie? Did they kill a lot of Amazons? Because that makes me less likely to pay for that movie. This entry was originally posted at https://philippos42.dreamwidth.org/161426.html, where Russian botspam is a rarity.
Had an idea for a moderately serious Batman fic about how a present-day version of Bruce sees the 2020 riots. (I never write fic.) Then thought I might change the names to be legally distinct.

Wait, what are Mex--

THE RETIREMENT COMMUNITY WHERE MA HELPS TAKE CARE OF HER BEST FRIEND'S MOTHER,

are seeing more growth in COVID cases than much of the country is now.

My hometown, while still very white, has one of the largest concentrations of black people in this part of the state. The KKK never cleaned it out.

I'm imagining now doofuses in little white bedroom communities & farm villages saying that "the city" is where the COVID is.

And it wasn't people in "the city" who might be gay, black, foreign, or (gasp) live in apartments who spread this. It was rich international travelers, & a government that covered it up.

I have a neighbor with MS who has to stay home until this passes or she may die.

And I see people going around without masks all the time. This entry was originally posted at https://philippos42.dreamwidth.org/159331.html, where Russian botspam is a rarity.
Ma told me she went to a small church service Sunday with about a dozen people. They had communion in little separate cups & stuff.

She seems to be OK so far.

The pain in my throat is mostly gone, but I started coughing a little Monday evening, not sure why. I want to get food, & I'm out of caffeine.

This entry was originally posted at https://philippos42.dreamwidth.org/159063.html, where Russian botspam is a rarity.
Collapse